Here is a note recorded by YW.

This is the default isolation level for InnoDB. It is implemented through MVCC (implemented in undo log) and Gap Lock (or Next-key Lock the combination of Record Lock and Gap Lock) which has below features:

There are some examples, as shown below. Through below examples, understand when a consistent read view will be created and the difference between snapshot read and current read. 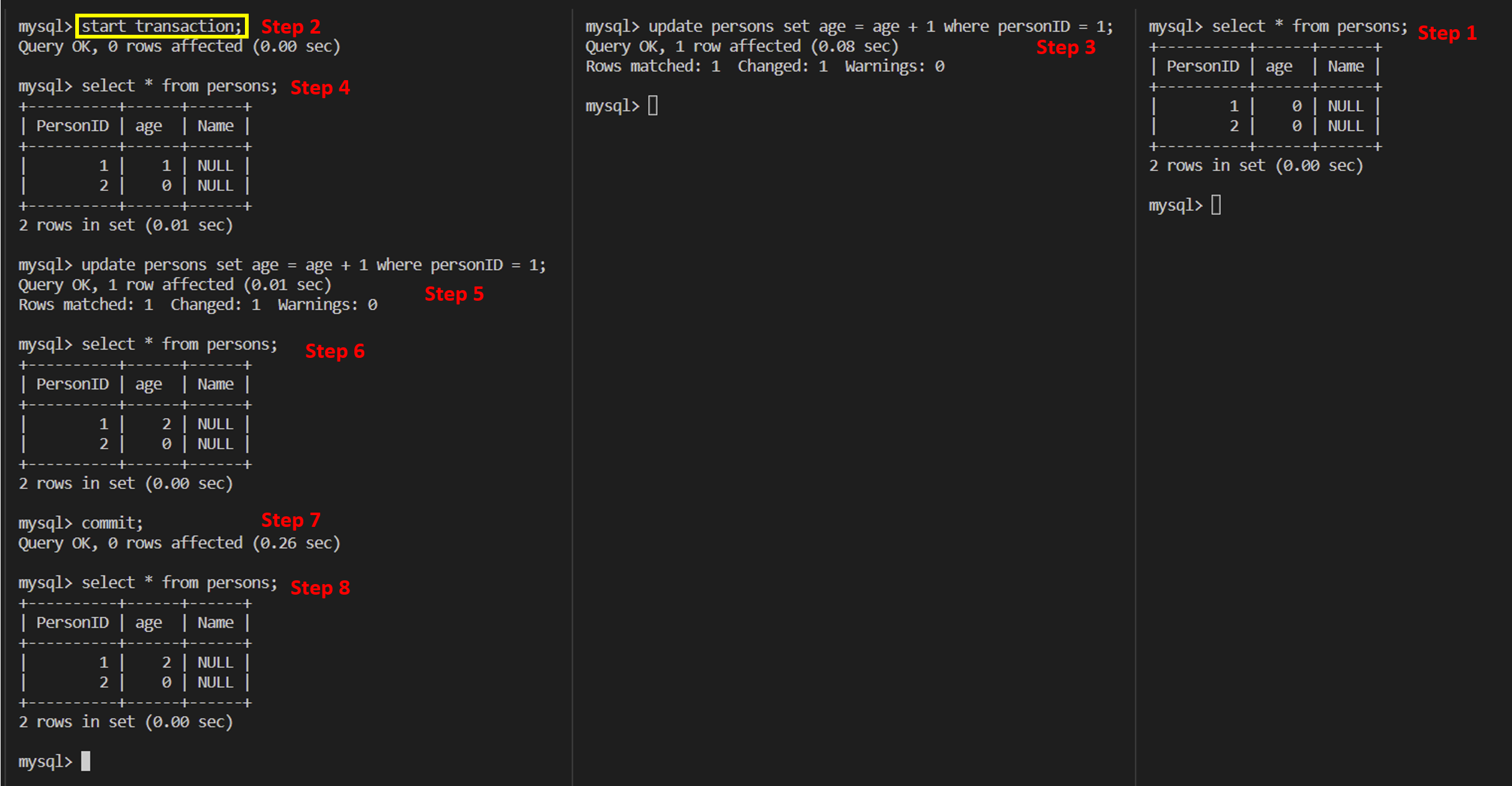 It shows that when executing start transaction statement, the consistent read view has not been created. 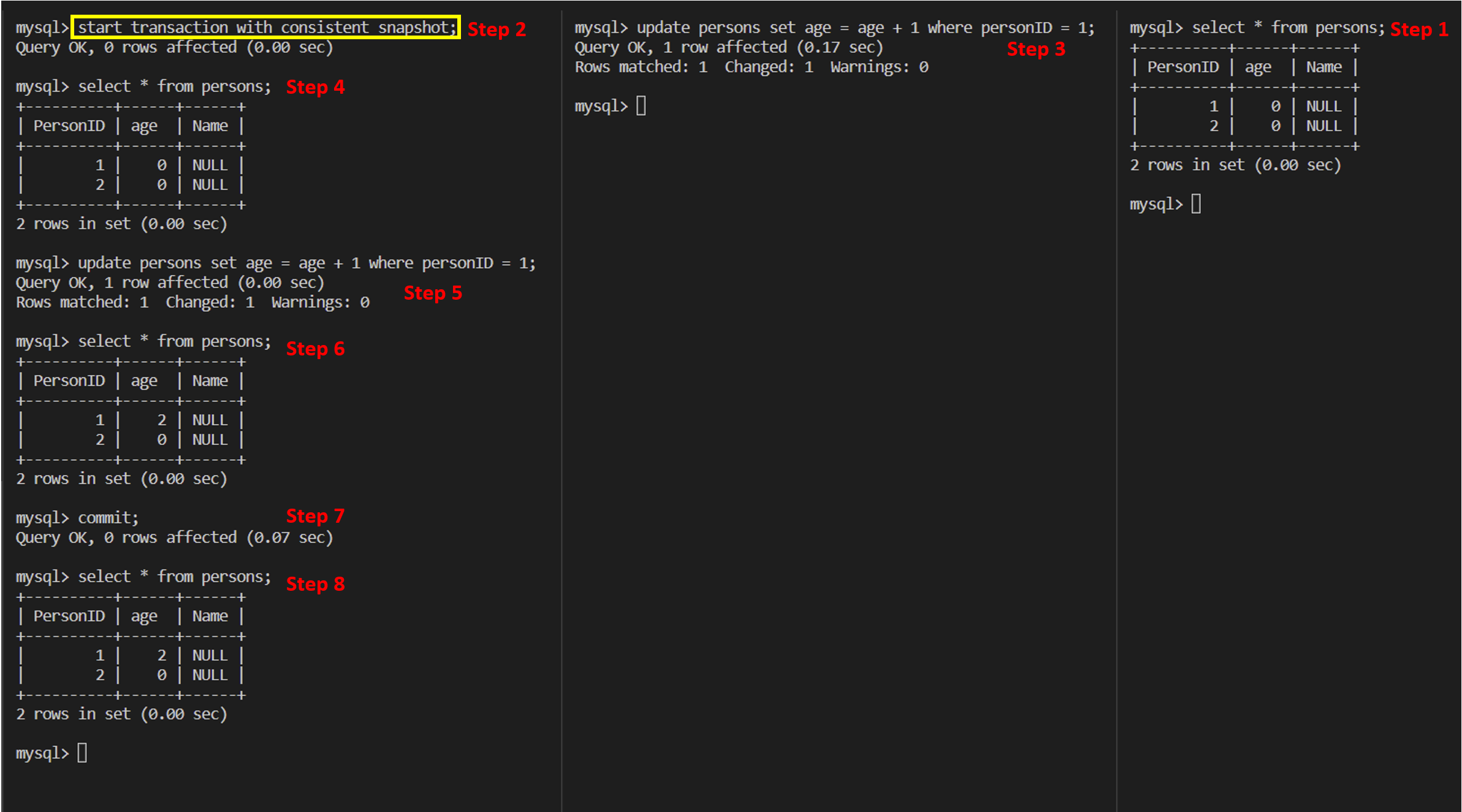 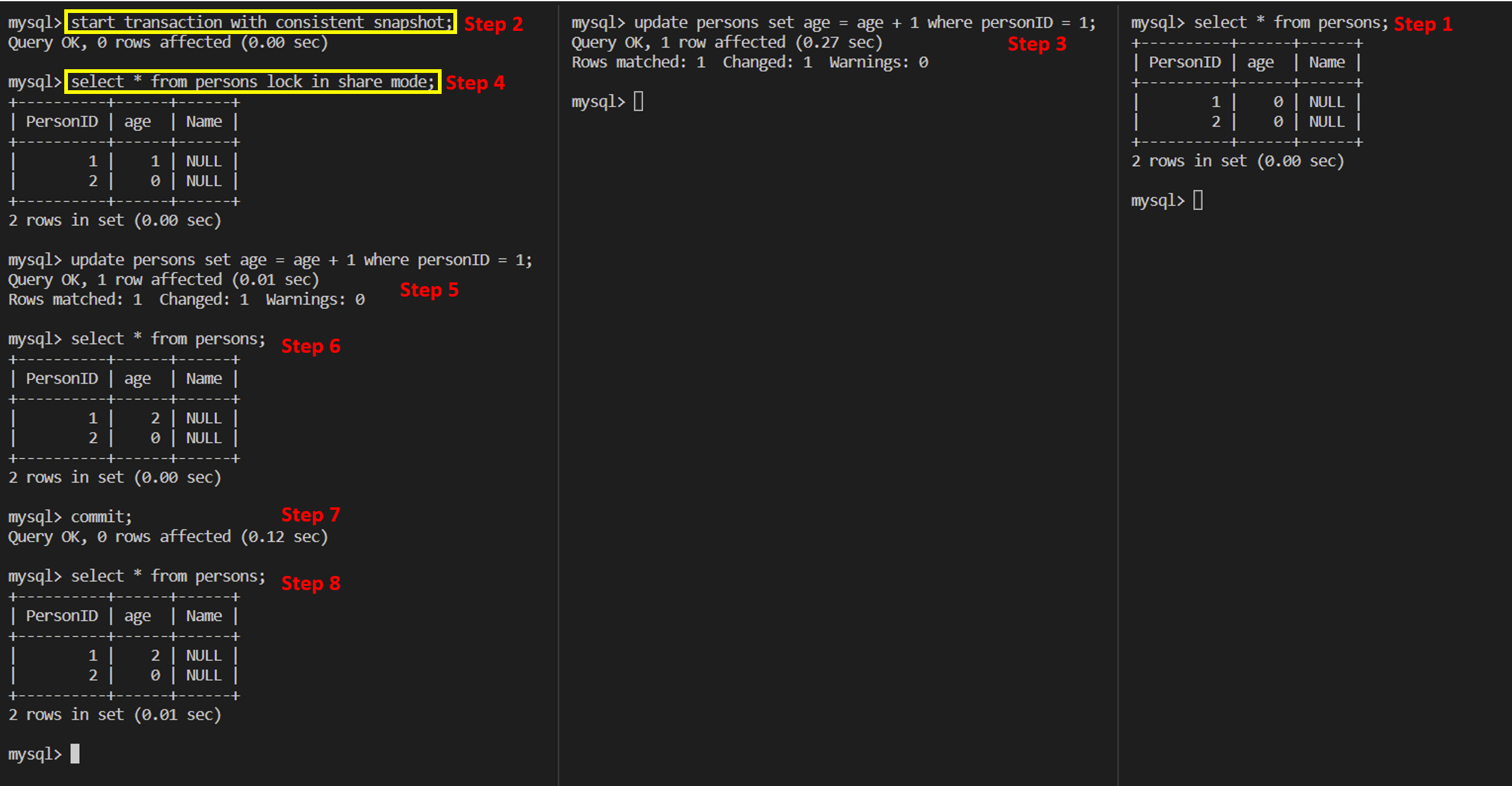 Question: lock in share mode is related with a shared lock but not a exclusive lock. Why does it still use the current read mode?

Answer: In official documentation, lock in share mode is called locking read, which are the same type with select for update, update and delete. 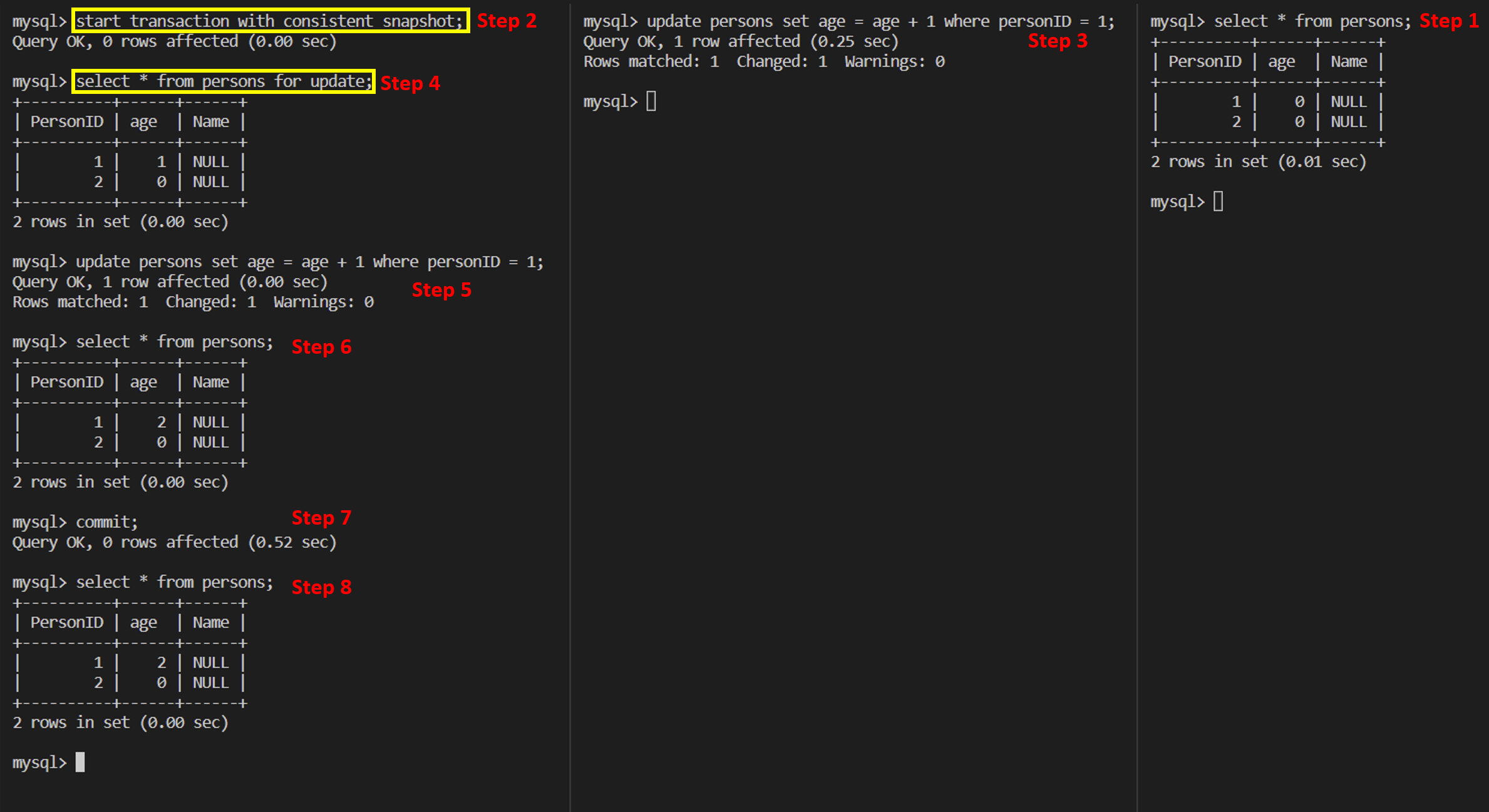 It shows that the consistent read view will be created when the first select statement executed, even if update statement was executed before. 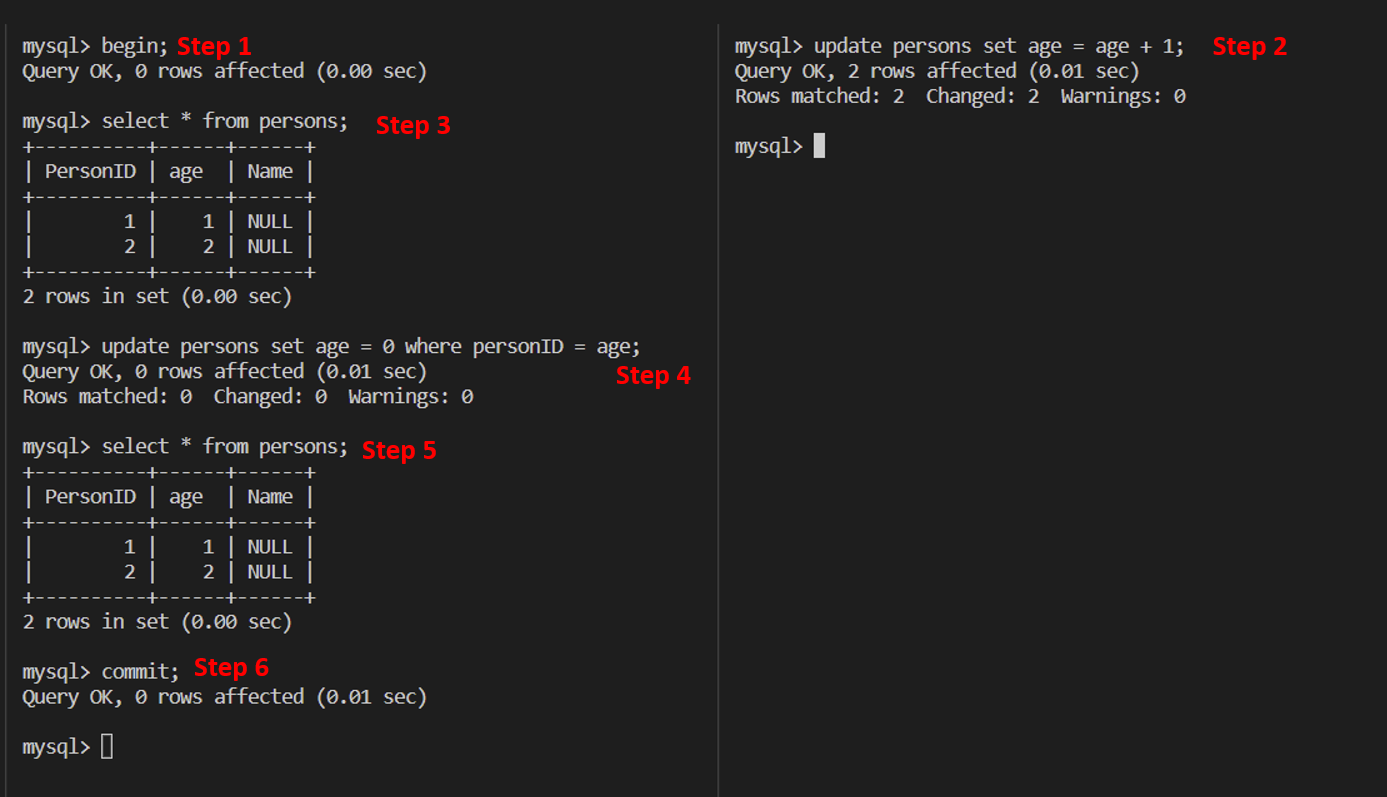 There are no scenario which can enable me to learn. # InnoDB Locks

There are many types of lock.

They are two standard row-level locking.

This locks are table-level locks that indicate which type of lock (shared or exclusive) a transaction requires later for a row in a table. There are two types of intention locks:

The intention locking protocol is as follows:

A record lock is a lock on an index record, preventing any other transaction from inserting, updating or deleting rows which is locked by record locks.

A gap lock is a lock on a gap between index records, or a lock on the gap before the first or after the last index record. It prevents other transactions from inserting a row into the gap, whether or not there was already any such value in the column, because the gaps between all existing values in the range are locked.

They are a combination of record lock and gap lock, which lock a gap left open and right closed (].

An insert intention lock is a type of gap lock set by INSERT operations prior to row insertion, which signals the intent to insert in such a way that multiple transactions inserting into the same index gap need not wait for each other if they are not inserting at the same position within the gap. E.g., there are index records with value 4 and 7, and seperate transactions that attempt to insert values of 5 and 6, respectively, each lock the gap between 4 and 7 with insert intention locks prior to obtaining the exclusive lock on the inserted row, but do not block each other because the rows are nonconflicting.

Why need take an insert intention lock prior to obtaining an exclusive lock on the inserted record?

Because insert intention lock and exclusive lock can form an exclusive relationship, which is very helpful in below scenes.

The No.4 statement is blocked by Client A and Client A can execute insert operation at id in range of (100, null) prior to Client B. Through SHOW ENGINE INNODB STATUS you can see

An AUTO-INC Lock is a special table-level lock taken by transactions inserting into tables with AUTO_INCREMENT columns. Through innodb_autoinc_lock_mode variable can set the lock mode to use for generating auto-increment values. The lock mode includes traditional, consecutive and interleaved. refer to 14.7.2.3 Consistent Nonlocking Reads for more.

A SPATIAL index contains minimum bounding rectangle (MBR) values, so InnoDB enforces consistent read on the index by setting a predicate lock on the MBR value used for a query. Other transactions cannot insert or modify a row that would match the query condition. This is not used by me now.

Some issue about locks

The order of acquire locks?

Only limit in MySQL version 5.7, innoDB engine and REPEATED READ isolation level. Firstly describe a table for the convenience of the following example. The id column is a primary key, c column is a no unique index and no index on d column as shown below

Test about Transaction and Locks

There are six types of logs in MySQL, which play an important role in the core functions of MySQL. They are error logs, query logs, slow query logs, transaction logs(including redo log and undo log) and binary logs(binlog). Understanding them is very helpful for us to use MySQL and below is show some information I learned.

It is used to record write operation in MySQL and be saved in binary format file. It is logic log of MySQL and recorded by server layer, which is not necessary and we can choose to disable it.

Here is a statement from the official documentation on the relationship between transaction commit order and binlog write order.

Binary logging is done immediately after a statement or transaction completes but before any locks are released or any commit is done. This ensures that the log is logged in commit order.

However, no clear statements about the order of timestamps in binlog and the order of other fields have been found in the official documentation. A survey on the order of certain fields will be listed below.

There are three logging formats shown as below, and row is the format I am using.

Here is an example to show. 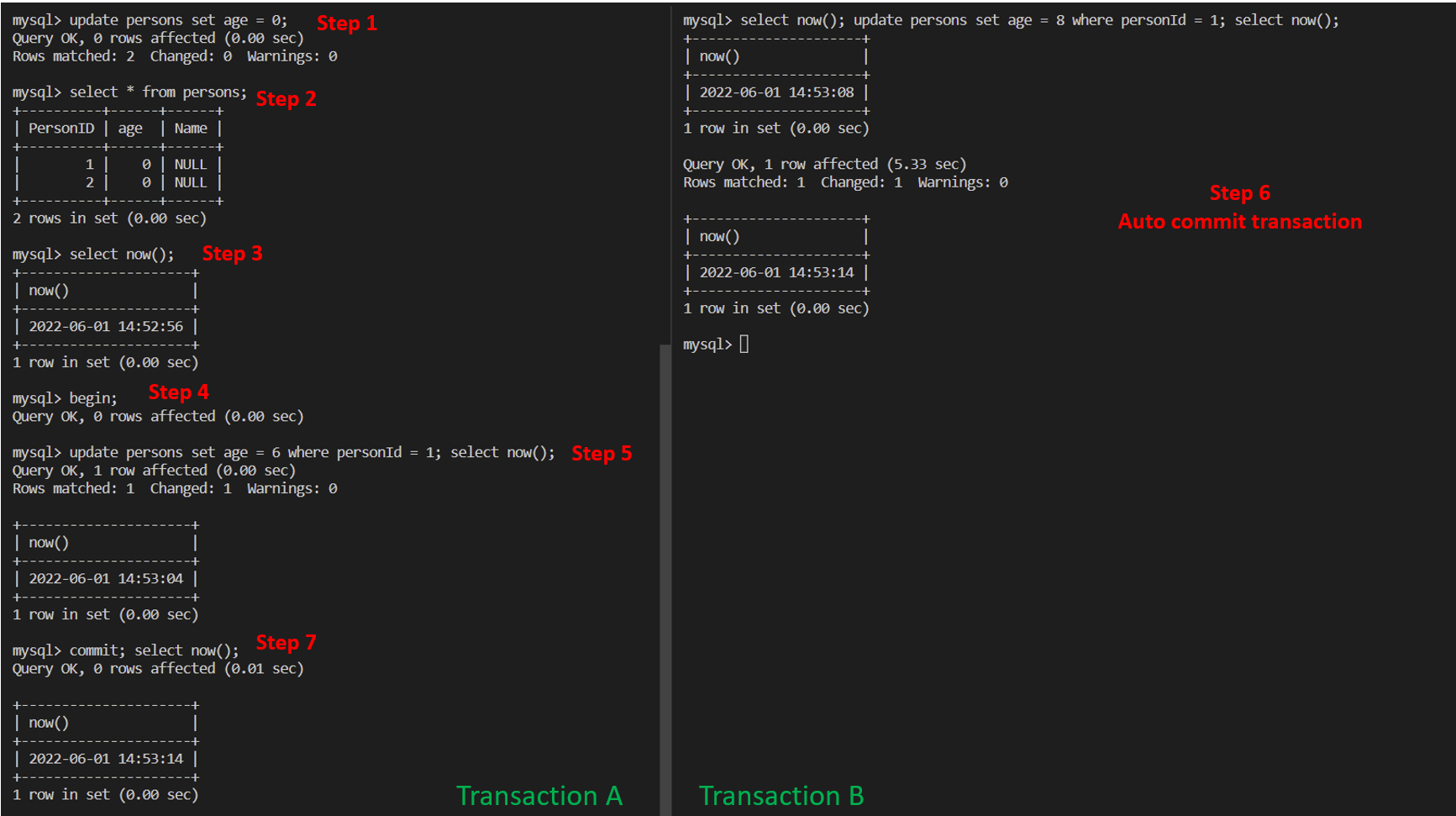 Through above experiment, I found that

So, The timestamps of transaction Xid events maybe are not ordered.

So, The ID of transaction Xid events maybe are not ordered.

The official document has the following introduction. GTID is the abbreviation of Global Transaction Identifier. When using GTIDs, each transaction can be identified and tracked as it is committed on the originating server and applied by any replicas. And it's not necessary to refer to log files and positions within those files when starting a new replica or failing over to a new server. Because GTID-based replication is completely transaction-based, it is simple to determine whether sources and replicas are consistent. As long as all transactions committed on a source are also committed on a replica, consistency between the two is guaranteed.

The format of GTID is shown as below. The source_id identifies the originating server, and the transaction_id is a sequence number determined by the order in which the transaction was committed on the source.

Question: Why is the GTID sequence number signed?

Answer: This answer is generated by GitHub CoPilot, pending to verify. .

GTID has the following features:

But GTID can't distinguish the order of transactions when master-slave switches.

It is designed for durability feature in ACID, using a technique called Write-Ahead Logging (WAL). Relying on Redo Log can achieve cash recover.

It is designed for automatic feature in ACID. Multi version concurrency control is implemented through undo log.

When crash happens at time point T1, the transaction will be rolled back and binlog has not been written, so the changes will not be synchronized to the replica databases.

When crash happens at time point T2, MySQL will judge whether the content in binlog is complete, if yes, commit the transaction, otherwise roll back the transaction.

Question: How to judge whether the content in binlog is complete?

Debezium is a tool which can parse MySQL binlog and generate the change events. It is very helpful for people to know what changes have happened in the database. Based on Debezium, It's hopeful to create historical database, which record the states of MySQL database at any time.

But there is a problem now. Debezium uses the time of the statement starts to execute, not the transaction commit time. This little difference makes knowing when the change is committed hard. Below is an example.

Important: This is an example of

There is a simple test, as the below step:

GTID is disabled in MySQL. 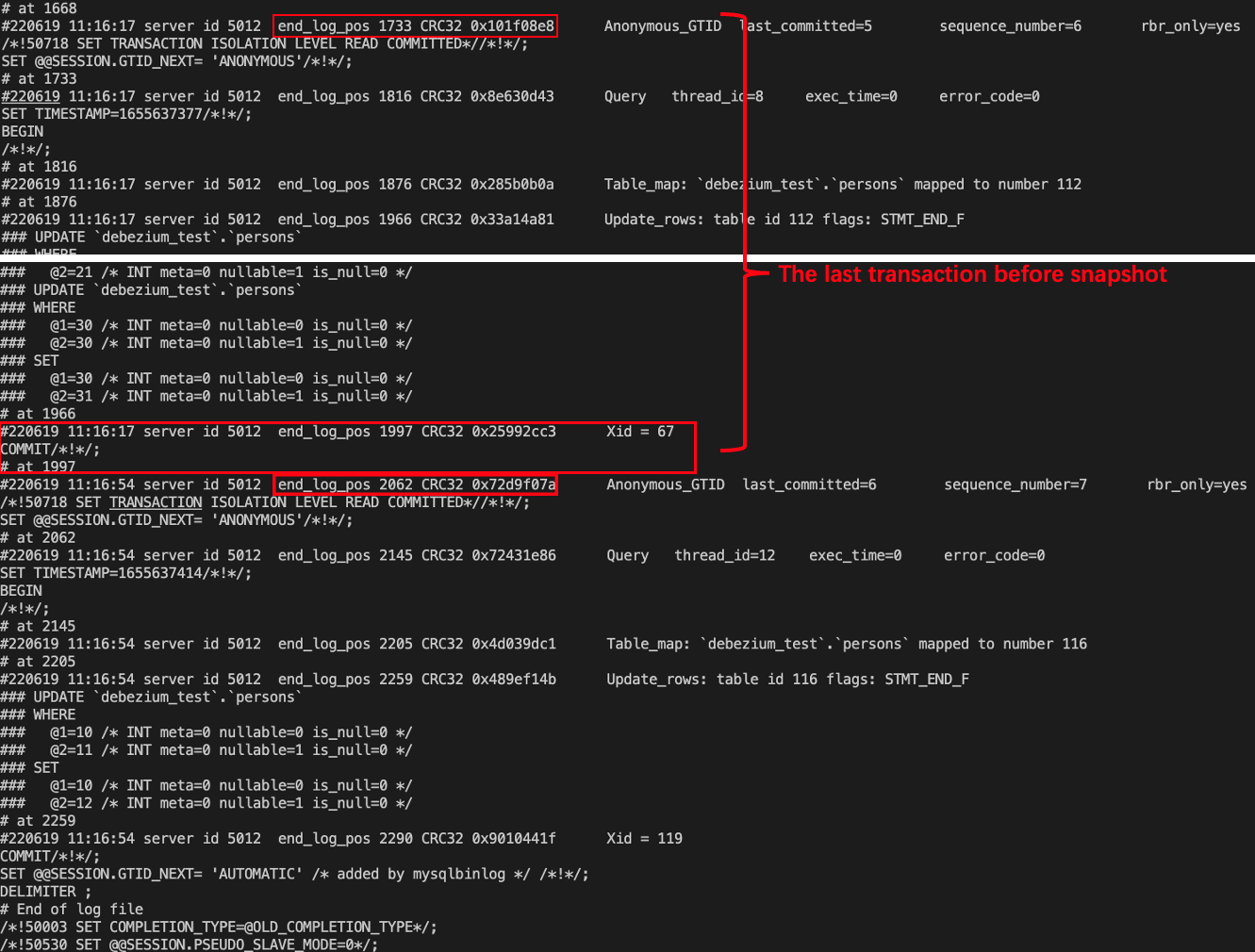